When your parents own a grocery store, it’s not unusual for them to give you a box of jalape?±os and ask you to preserve them before they go bad. At least, that’s the case with my folks.

That’s how I ended up making gochu jang-ajji late one night. As it so happens, I do a lot of my cooking late at night. So, I apologize in advance if the images on this post is less than in crisp focus.

I started with some jars of varying sizes. I used whatever I had laying around because I wasn’t too worried about vacuum sealing them for proper canning. However, if you’re going to be preserving your peppers for longer, use the proper jars and lids.

Although I was pickling peppers, it wouldn’t be a Korean recipe unless you started with a ton of garlic. So, I peeled about a bulb or so of garlic cloves and left them whole, dividing them amongst the jars. 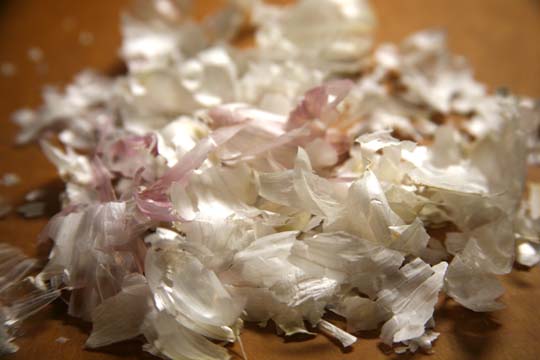 Then, I sliced the jalape?±os and packed them tightly into the jars‚Äîas many as would fit into each. If I were pickling milder Korean peppers I would’ve left them whole, but with these spicy ones, I sliced them. This makes for faster pickling and easier eating later on.

Then, I dissolved some sugar in soy sauce and vinegar and stirred until all of the sugar was dissolved. I’m including a recipe from Eating Korean, but I always just wing it when I do Korean pickling. I just keep adding the 3 ingredients until it tastes right to me, since it doesn’t have to be perfect.

I poured the seasoning into each jar and topped them off with just a bit of water. Since I was going to refrigerate these jars, I didn’t worry about sterilizing, etc. But I did make sure the lids were tightly closed and all the air bubbles were out of the jars. 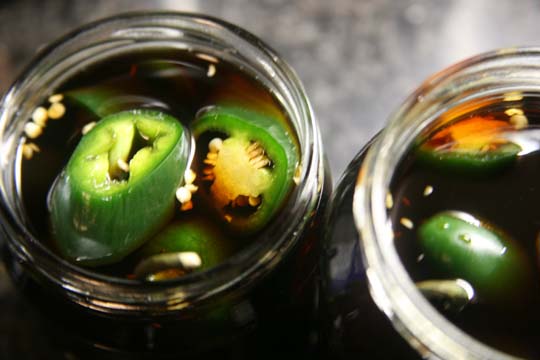 And voila! Pickled peppers. Peter Piper would’ve pickled his peck of picked peppers this way. That is, if he were Korean. Then, he more likely would’ve been called Peter Park, anyway.

Wash and rinse the peppers and place them in a medium-sized glass jar. Add peeled garlic cloves. Combine the soy sauce, 3/4 cup water, vinegar and sugar until the sugar is dissolved completely. Slowly pour the soy mixture over the pepper making sure that no air bubbles form. If they do, shake the jar slightly or stir with a chopstick until the air bubbles disappear.

Take a pair of wooden chopsticks and cut them each so that they will fit just under the lip of the jar. Jam the chopsticks in a cross pattern over the peppers to make sure that they are immersed in the pickling seasoning. Cover tightly and store in a cool, dry place for about 2 weeks.

Serve peppers whole either at room temperature or chilled. Refrigerate after opening.