Gujeolpan – A Delicacy with Nine Flavors

I had the privilege to speak at a Korean food academic conference at the University of Toronto last month. One of the highlights of the day was the pre-lunch demonstration by Executive Chef Jeong Chanbu, of Bulgogi Brothers. He used to be a chef in the Blue House (the Korean equivalent of the American White House) cooking for the president and his family.

He did a cooking demonstration of Gujeolpan – which literally translates from hanja to “nine section plate,” which is always touted by the Korean government as one of the most beautiful and colorful examples of Korean cuisine.

It was invented during the 14th century as a dish to serve the kings and queens of the Joseon Dynasty. Even now, it’s an elaborate dish that takes hours of preparation.

Here is Chef Jeong peeling the cucumber so very thin. He said it was the knife that was so sharp that it was doing all the work for him, but look at his skills. 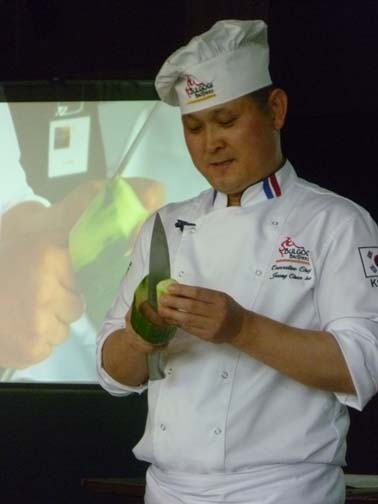 You can see how thinly he’s cutting all of the vegetables. 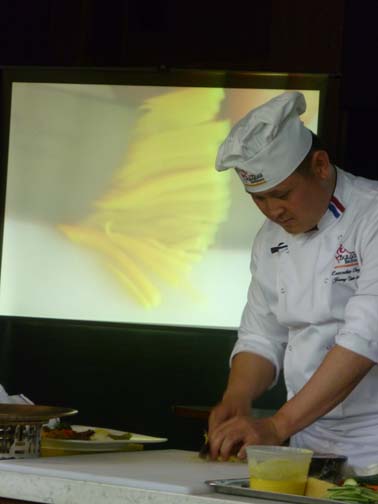 It really is a beautiful presentation, here it is on a brass plate for consumption. 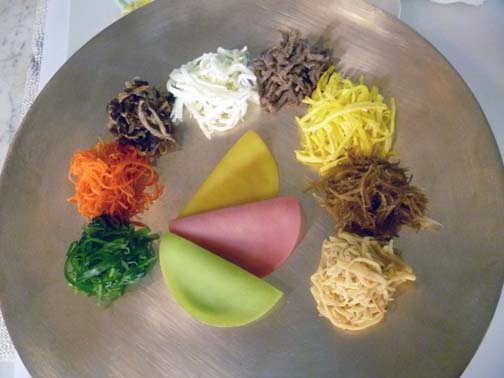 And here it is with a “royal” presentation in the traditional wooden 9-sectioned plate. Each of the sections contains a different vegetable or meat, like beef, leeks, radishes, carrots, cucumber, mushrooms, eggs, etc., with the middle section reserved for the “miljeonbyeong” the thin pancakes used to wrap everything inside. Chef Jeong even made his pancakes fancy by adding a bit of natural color to them. 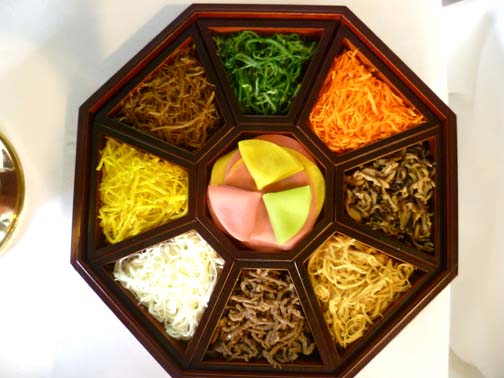 If you’re inspired to try and make this dish at home, here’s a pretty good recipe from chow.com. It takes probably about 2 hours to make it (although you can prepare much of it in advance if you’re planning on impressing your friends for a dinner party).

For those of you, who have no intention of trying this at home, there are plenty of restaurants in Seoul that make royal cuisine and can offer this delicacy, for a price of course.

2 thoughts on “Gujeolpan – A Delicacy with Nine Flavors”