I had heard about the drinking vinegar craze in Korea for a few years now. And I’ve finally gotten a chance to taste some of them at the Fancy Food Show last week.

For those of you who’ve never heard of drinking vinegars, it’s not a new fad at all. In fact, it’s actually old world and people have been drinking vinegar for its supposedly healthful benefits for centuries. From balsamic vinegar downed by the Romans to fruit vinegars used as mixers in the South during prohibition, drinking vinegars (also called “shrubs”) spans different cultures and time boundaries.

In Korea, they’ve been touting them as anti-oxidants, cleansing agents and digestive aids for the past few years. 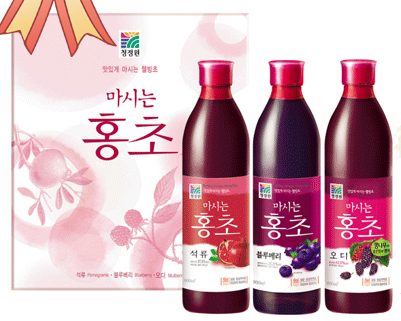 The Korean versions come in flavors like persimon (gamsikcho), pomegranate, black raspberry, blueberry and others. The black vinegar is called “heuksikcho” and any number of the red berry or pomegranate flavors are labeled “hongcho” or “hongsikcho.” They are delightfully tangy and not so sour to make you pucker.

You’re not supposed to drink them straight, but diluted with some ice water, hot water, seltzer or even used as an ingredient for mixed drinks. Korean also mix it with milk to make a “yogeureauteu”-type drink, as well.

He suggests making your own by soaking your choice of fruit in a good quality apple cider or wine vinegar for about a week; adding some sugar, boiling for an hour, straining and keeping the bottle in the fridge for months.

I haven’t taken to making my own yet and I’m skeptical about the health benefits. However, I did find the drinking vinegars to be a refreshing alternative to heavily sweet juices or corn syrup-laden mixers.

Here in America, we can find them in Korean, Chinese or Japanese markets. Or go crazy and make your own. Even if they’re not good for you, they’re pretty dang tasty and they couldn’t hurt.