I mentioned “gimjang” in my previous post without giving an explanation (sorry I just got back from Korea and I’m still thinking in Konglish). So, I wanted to give a bit of explanation here.

Gimjang is serious gimchi-making. It’s the traditional annual event when families make huge load of gimchi in preparation for “eumdong,” the coldest months of winter (and with the Siberian winds flowing down from the north, the Korean peninsula sure does get cold). It usually happens in early winter, called “ipdong” (nowadays, since fall seems to come later and later in Korea, not until November).

Here’s a picture I borrowed from wikipedia, which will give you a better idea of what I’m talking about: 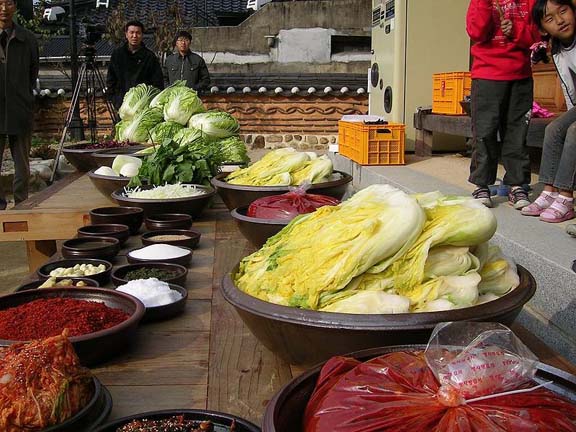 Traditionally, groups of families in the village would take turns going over to each other’s houses and helping each family make their gimjang gimchi. It was a communal effort, when women could catch up on the latest gossip, share the hard labor and enjoy the fruits of that labor. Since gimjang for each family took a day or two, the hostess would provide a big lunch for all her helpers (usually boiled pork and “bossam,” gimchi stuffing material wrapped in a pickled cabbage leaf ‚Äì tasty!). Everyone would take a jar of it home, so even the poor could have gimchi for the winter.

I remember our backyard full of noisy Korean ladies, all chatting away, laughing and stuffing glass jars full of spicy baechu gimchi.

The old-school way of maintaining the proper temperature was to bury the giant “hang-ali” (the dark brown, clay pots, pictured below) in the ground, then cover them with straw mats. 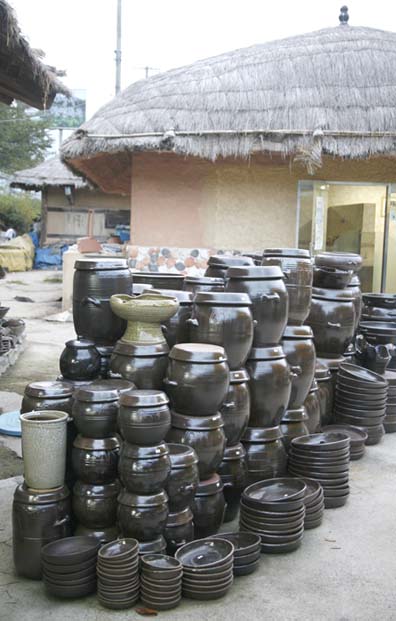 Gimjang, which was established as a nationwide custom during the Joseon Dynasty, is an excellent example of the Korean people’s connection to the seasons, the communal way of life, and a preservation (literally) of the food.

Although people still make gimjang gimchi, the traditions have changed. I found out the dirty secret of those living in Seoul’s apartments. They have their cabbages pre-soaked in salt by people who sell the baechu. They get their jjangaji (salted fish) delivered to them. And they just assemble all the ingredients and store them in their gimchi refrigerators!

Because I live in Los Angeles (and don’t have a gimchi fridge), I won’t be making a huge load of gimjang gimchi, but I might just make a jar or two, which definitely won’t last through the winter.

2 thoughts on “What is Gimjang?”