Although Koreans have been eating fried chicken for years, it hasn’t been until the last couple of years that Americans have been made aware of the special flavor of Korean fried chicken. The articles in the New York Times and Saveur magazine made it seem like it was some new discovery. 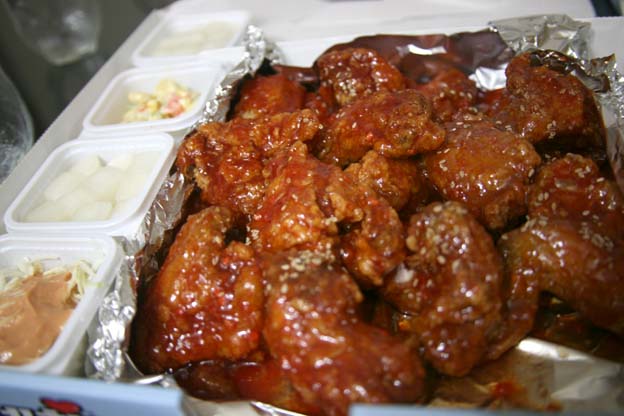 I’ve been having a good laugh with everyone going crazy about Korean fried chicken, like the double frying and the seasoning was such a big secret. Koreans have been double frying our chicken since at least some time in the 1970s. And the Chinese have been doing it for even longer. The other secret to our crispy fried textures is the addition of cornstarch in the batter.

I remember how excited the Food & Wine Annual Cookbook editor was after she had tried my Yangnyeom Dak recipe from my first cookbook (Eating Korean).

Now, Korean “fast” food joints have re-exported fried chicken back to the United States. Kyochon in the Los Angeles area and Bon Chon Chicken in both NYC and LA are the two franchises that have been creating all the buzz.

Unfortunately, the imports do mostly fried chicken wings vs. the Korean way of cutting up the whole chicken and frying it all in its funny shapes, bones and all. (Though you can get whole chicken from Kyochon)

The beauty of friend chicken joints in Korea is how easy and quick it is to get your order delivered. In addition to the yangnyeom dak (pictured above), we also ordered pa dak (which is fried chicken w/o any seasoning topped with a giant pile of green onions). You dip it all in this goopy sauce made with soy sauce and spicy mustard. All the fried chicken is served with a side of pickled daikons and delivered in these flat boxes that look like thick pizza containers. 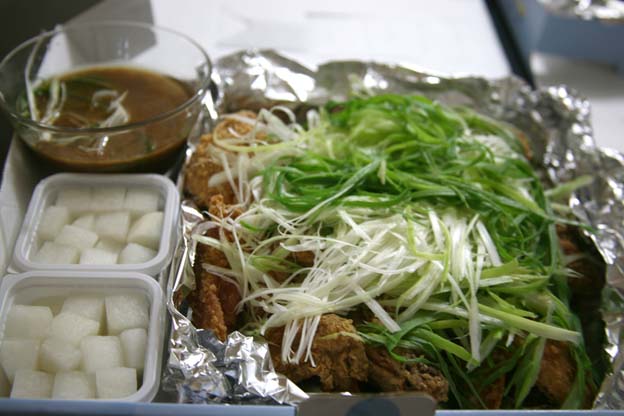 One thought on “Korean Fried Chicken”