While the French colonialism of Vietnam resulted in bahn mi sandwiches, the American involvement in the Korean War led to “budae jjigae,” which translates directly to “army base stew.” It was also called “Johnson Tahng” (“tahng” means soup and “Johnson” was a reference to the common American surname).

Some of us affectionately call it “spam stew” because it’s made with spam and vienna sausages. I know it sounds a little strange, but during the war, canned meat and hot dogs were the only sources of protein available. Koreans took the processed meat and made a spicy hot pot with whatever ingredients they had around, all spiced with garlic and gochujang (chile paste). A budae jjigae could have contained macaroni, baked beans and ramen, in addition to canned meat.

You can still get the dish in restaurants in Korea. The satellite town of Uijeongbu, where an American army base is still located, is famous for its budae jjigae restaurants. And in Seoul, there has been a bit of a revival as of late, due to a chain restaurant here that’s been serving variations of the dish. Here’s their menu: 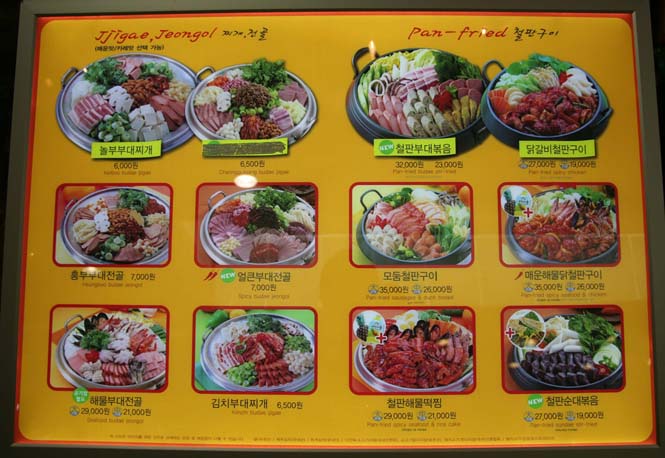 Although they’ve fancied it up since the war, it’s still a poor man’s dish. For only 6,000 to 7,000 won you and a friend can share a bubbling hot pot of spam, hot dogs, gimchi, tofu, baked beans, onions, rice cakes, mushrooms and other delights. Here’s a close-up of a couple of variations:

They even serve the dish in Korean restaurants in Los Angeles and other places where Korean immigrants are concentrated. It may be one of the first Asian-American fusion dishes, thanks to an unfortunate war.