In a city as large and densely populated as Seoul, it pays to get lost every once in awhile and I’ve been lost plenty in doing my research for my upcoming Frommer’s Seoul Day by Day guide (which isn’t available yet, since I haven’t written it). It’s coming out Spring 2011.

As I continued to walk, I saw that the entire train was filled with food vendors! So, I went inside to investigate this subway “shijang.”

There were people selling fruits and vegetables, natural honey, homemade chile paste and all kinds of other foods and beverages. This man even had a refrigerated case from which he was selling fresh beef. 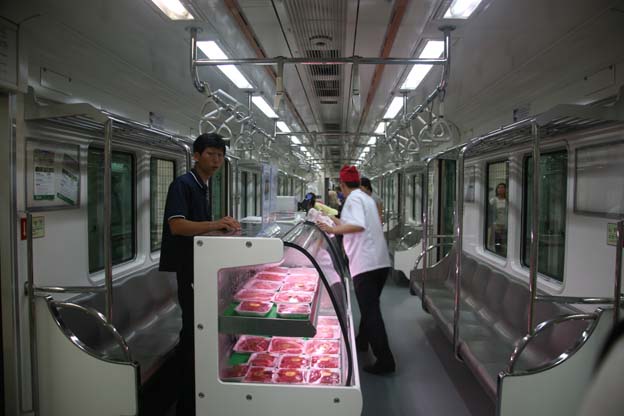 Most of the vendors are farmers or direct suppliers, who grow and make the products themselves. Even most Seoulites, who’ve lived in the city their whole lives don’t know about this market, especially since it’s an occasional occurrence.

The Cheongdam station is off of subway line 7 (in Gangnam-gu). The subway shijang is available from both directions (since the train is parked in the middle with both doors open). They operate only on the 2nd and 4th weeks of the month on Tuesday, Wednesday and Thursday, only from 3-8pm.

There are other subway shijang at various other subway stations, but they are more sporadic and changeable. The Cheongdam subway market has been in operation since the end of 2009.