Gimjang at My Great Aunt’s House

I arrived in Korea just in time to peel pounds of garlic and julienne piles and piles of Asian radish (mu) in preparation for the annual gimjang. Thank goodness for sharp knives and mandolins! 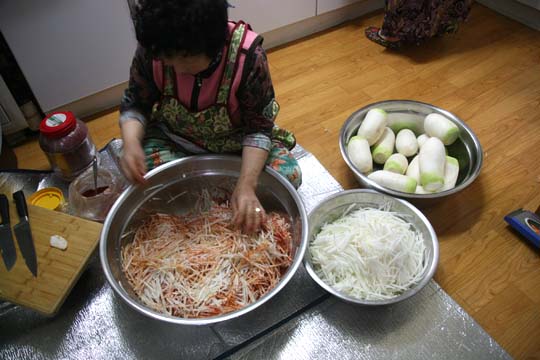 The radish starts as white as snow and we mix spices, seafood, seasoning and other vegetables. 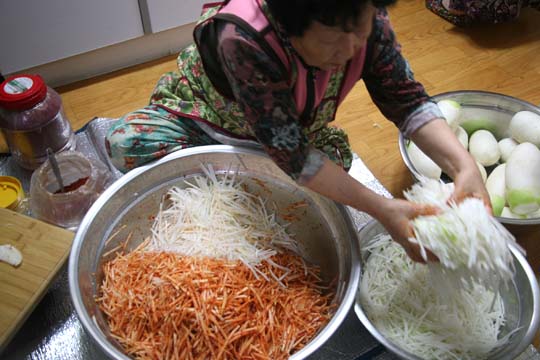 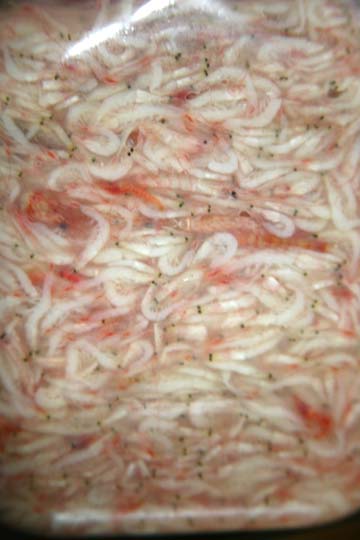 And put in a generous amount of it into the mix. She also added fish sauce I brought from America, as well as actual coarse sea salt (since the sea salt helps to keep the cabbage crisp during fermentation). 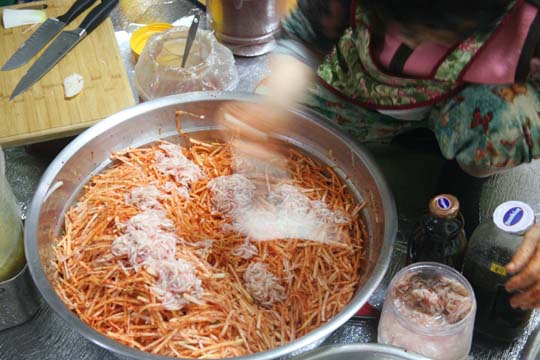 She made a flavor mix out of chile powder (gochu galu), garlic, cooked rice and sea salt. 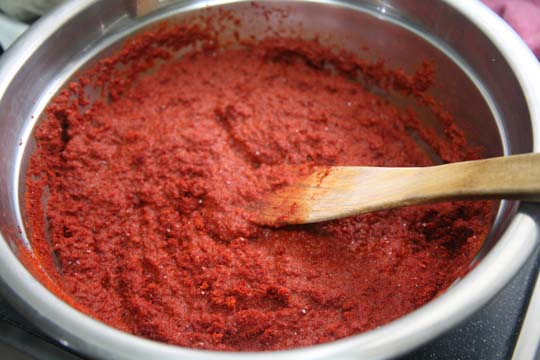 And we added generous amounts of miced garlic (Kimchi wouldn’t be Korea’s national dish without it, I think.). 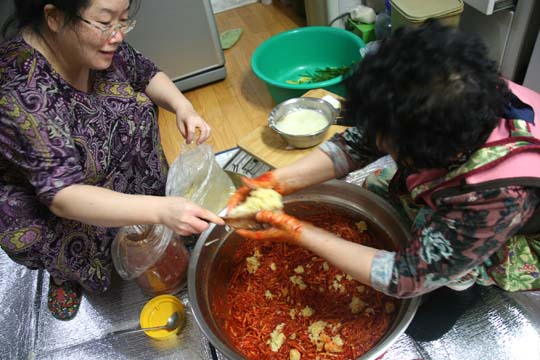 Tubs full of thin green onions (pa) and mustard greens (got) get added to the filling. 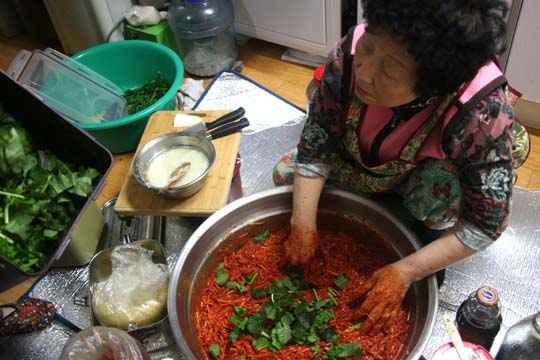 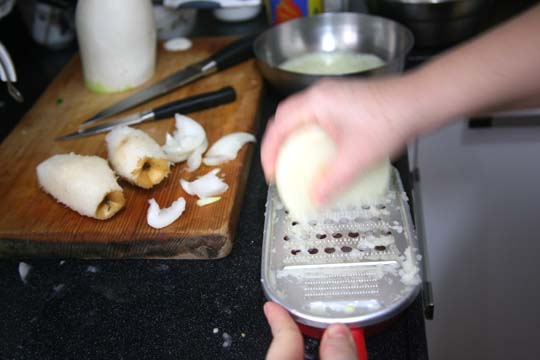 Some ginger gets grated into it too and then it all gets added to the filling. 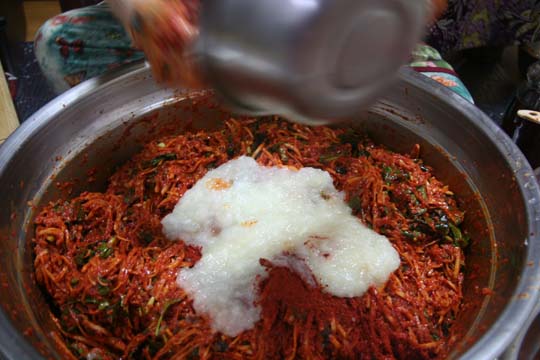 My great aunt puts in some sweet plum (meshil) tea that she had prepared beforehand (in lieu of sugar), as well as some cooled fish broth from boiling dried fish. After mixing and mixing, the filling is finally ready (Notice how nice and red it is!). 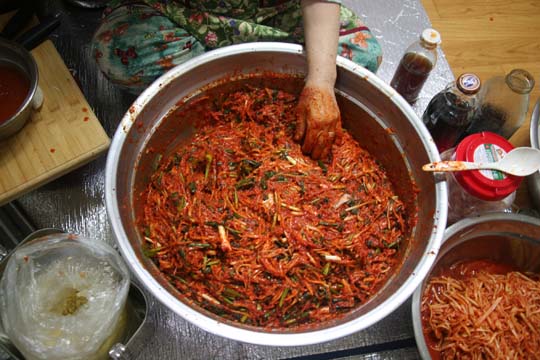 Now for the napa cabbage (baechu). In the old days, we used to sprinkle the cabbage leaves, one by one with sea salt and soak the baechu overnight. Now, in the cities, you can order your baechu, pre-brined, pliable and ready for filling. 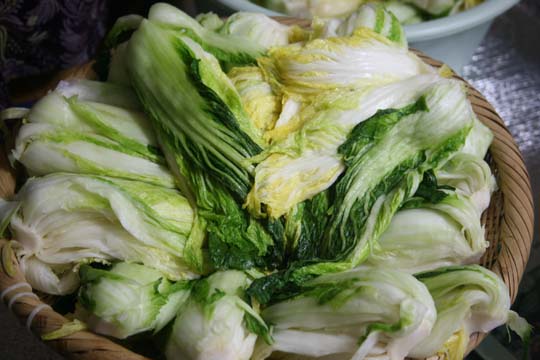 The labor intensive part is the stuffing of the cabbages, one by one, with a bit of filling between each leaf. 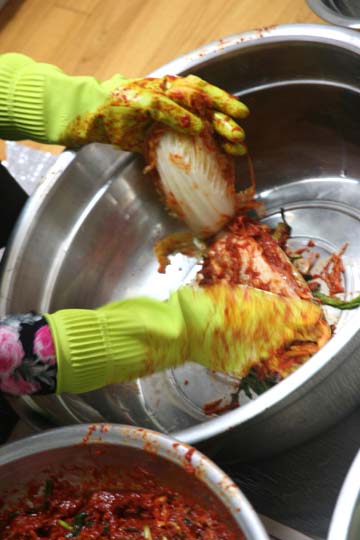 Then the large outer leaf is used to wrap each 1/2 head. One by one until all the cabbage is stuffed. 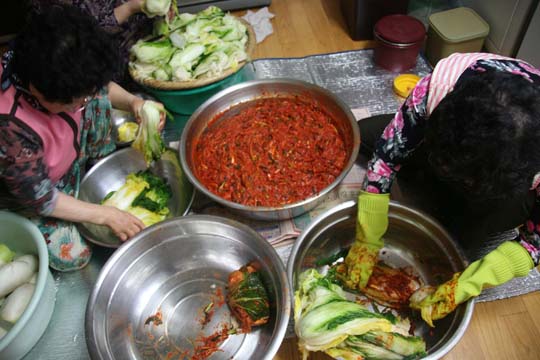 Once all the cabbages are filled, they can put into containers. In the old days, they were put into large clay pots and buried in the snow. Now they go into giant tupperware containers and get neatly packed into kimchi refrigerators ready for a year’s worth of kimchi eating!

5 thoughts on “Gimjang at My Great Aunt’s House”