The last time I was in Seoul, I wanted to get Korean vegetable seeds to take back home to Los Angeles (probably a touch on the illegal side, but I’m only growing them to eat).

After asking around and doing some research I found some nice nurseries and seed shops in the Dongdaemun area. I went to a store, called “Aram,” where they cultivate the seeds directly. The owner was really nice and helped me pick out plants to bring home to my humble garden.

Here are some of the packets:

I chose a hobak (squash), some sangchu (lettuce), baechu (Korean napa cabbage), altalimu a.k.a. yulmu (ponytail radish), ggaetnip (perilla), oi (cucumber) and she even threw in a geundae (some type of chard) packet. I though some of the packets were pricey at W3,000 each (about $3), but when I opened them up, there were enough seeds to populate an entire field!

I just put them in seed trays (recycled egg cartons) on Monday and am eagerly waiting for the little sprouts to poke their heads out of the dirt. 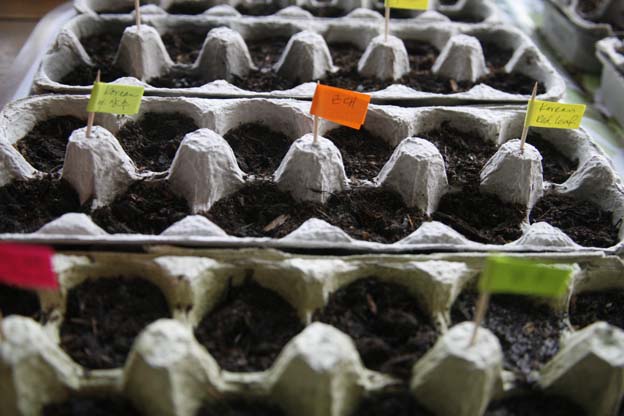 I’ll occasionally post pix and updates as the little plants progress. Last year, I had way too many tomatoes, so I’m trying to vary things up a bit this year.

Now if the rains could just stop a bit so I can dig up the weeds in the front yard and prepare the beds for planting. But we rarely get so much rain, so I can’t really complain.

37 thoughts on “Vegetable Seeds from Korea”